Up close with the HTC One X (photos)

DesignLooking at the One X, it's clear that HTC strayed a bit from tried-and-true design playbook. Instead of the aluminum unibody construction the company's handsets typically sport, the One X is crafted from a single piece of polycarbonate plastic. Believe it or not, that's a good thing, since the plastic material HTC selected feels high-grade, not the cheap stuff I've seen in other phones. As a result the One X's chassis has a pleasingly premium quality similar to the Nokia Lumia 900, another handset that opts for pricey Lexans over metal.

A flat slab that has smoothly rounded edges and a gently curved back, the HTC One X definitely flaunts an ultramodern aesthetic, especially the chic white-hued version I reviewed (HTC also makes a soberer black model). You'll want to be careful how you tote the One X since its white surface attracts smudges easily. Measuring 5.3 inches tall by 2.75 inches wide by 0.36 inch thick, the One X certainly is a handful. Still, its 4.6-ounce weight lends the plastic phone some solidity.

Gracing the front of the device is a massive 4.7-inch (1,280x720-pixel) super LCD screen. It gets very bright, brighter in fact than the HTC One S' qHD AMOLED screen, and has viewing angles that are nice and wide. Of course the One S' high-contrast display produces more vibrant colors and darker blacks, which I prefer.

Above the screen sits a 1.3-megapixel front-facing camera for video chats and vanity shots. Below the display are three capacitive buttons for back, home, and recent apps. On the phone's right side are controls for volume, and a Micro-USB port sits on the left. Up top are a tiny power button, a micro-SIM card compartment, and a 3.5mm headphone jack, while around back are the 8-megapixel camera and LED flash. Two big drawbacks, though, are the phone's lack of an SD card slot for extra memory expansion and its nonremovable battery.

FeaturesIn addition to the phone's cutting-edge components, much of the HTC One X's real power lies in its robust software. Not only does this smartphone run the latest version of Google's Android OS, version 4.0 Ice Cream Sandwich, but also HTC has gingerly grafted its revamped Sense user interface on top. HTC says that Sense 4 meshes seamlessly with ICS' new abilities and strives to stay out of the way. Indeed, much of Sense 3's fancier eye candy, such as the endlessly spinning 3D carousel of home screens and over-the-top weather graphics, is absent.

There are two ways to unlock the phone; you can either flick a virtual ring from the bottom of the screen to the center, or slide icons into the ring to quick-launch major phone functions. For instance, dragging the camera symbol into the ring fires up the One X's main imaging sensor to snap pictures and video in a flash. Other standard lock-screen shortcuts bring up the Web browser, text messaging, and phone dialer.

Just like on T-Mobile's HTC One S, you can choose from seven screens that you can populate with application shortcuts and animated widgets. By default, HTC places its iconic weather clock front and center on the main home screen. Tapping the widget's digital readout launches a world clock complete with a slick 3D globe visual, and hitting the weather portion of the clock pulls up a detailed forecast. Another boon to weather nerds like me is the engaging graphics displayed on the lock screen that correspond to current atmospheric conditions. I was even able to choose them as my live wallpaper. 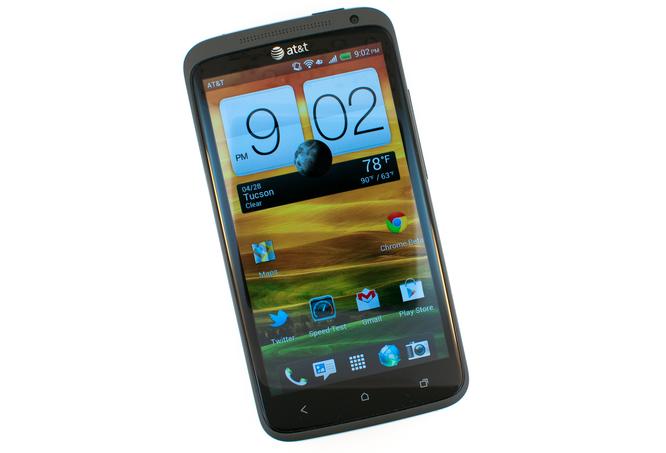 At the foot of each home screen is a tab containing the same four quick-launch icons shown on the lock screen. I particularly liked being able to swap these icons for others or even create and add folders holding multiple app icons. Any changes here are reflected on the lock screen and placing application shortcuts on top of one another creates a folder.

Sense adds some neat tricks to the browser, such as a Pure Content Reader view that removes all ads and displays just the basic text of a selected Web page. You can also choose pages and video to bookmark for later perusal offline.

As you'd expect on a modern Android device, the One X comes with the usual Google services onboard, including Gmail, Google+, and Navigation, along with the Play Store, from which you can download apps from a catalog of over 500,000 titles. Play also provides digital books, movies, games, and music to purchase. If that's still not enough entertainment, HTC's Watch app hawks TV shows and movies for rental or purchase. For example, I could rent "Mission: Impossible - Ghost Protocol" for $3.99 or buy it permanently for $14.99.

Other compelling third-party software that's preloaded on the One X includes the Kindle eBook reader, the MOG music subscription service, and TuneIn Internet radio (a personal favorite). AT&T sprinkles the device with its own selection of apps, such as U-verse Live TV, which serves up both live programming and full TV episodes and movies (for an extra $9.99 per month, and you can't use it over Wi-Fi), a bar code scanner, and FamilyMap for locating family members ($9.99 per month for two family members, $14.99 for up to five).

As we've seen on other HTC devices, social-media integration is just as strong in Sense 4 as in previous versions. Facebook, Twitter, and Google+ apps are preloaded, plus a Friend Stream widget pulls all updates across multiple social media platforms to view in one location. Similarly, the People app will analyze your contacts list automatically and suggest any possible links, between say Gmail, Facebook, and Twitter. Additionally, within a friend's contact details I was able to view any albums my friend posted to Facebook and any recent updates like messages or missed calls.

HTC plays up the fact that the HTC One X boasts Beats audio processing. In theory, it automatically will activate a targeted equalizer profile to match specific Beats-branded headphones. As with my experience with Beats on the HTC One S, however, I found that it often pumped up bass way too much, killing the mids and highs. Certainly some tracks will benefit from the heavy Beats audio treatment, especially ones where booming bass is the central draw. Thankfully HTC also provides a group of equalizer settings and per CNET headphones editor Justin Yu's suggestion, I tried the Sweetener profile, and found it offered the most balanced audio across all genres to my ears and his.

CameraHTC's new One series smartphones have what the company calls ImageSense technology. Essentially this is a buzzword signifying that the phone's 8-megapixel camera relies on a dedicated image processor for quick performance. It also indicates that HTC added additional photo goodies such as a wide range of scene modes that go way beyond the typical camera phone options.

Besides staples like face detection, auto smile capture, and panorama, the One X has an HDR (High Dynamic Range) mode, which uses the handset's back-illuminated sensor to add shadow detail to what would otherwise be overexposed shots. A Continuous Shooting mode snaps images in bursts of up to 4 frames per second, great for shooting unruly or fast-moving subjects like kids and pets. Another one of the One X's handy skills is the ability to record video in up to full 1080p HD quality and grab 8MP stills either while the camera is rolling or when playing back movies later.There's even a Slow Motion video feature to capture footage at a high frame rate to review at a snail's pace.

The HTC One X's camera image quality didn't disappoint. The phone took test shots of an indoor still life with accurate color and sharp details even under challenging fluorescent lighting.Outdoors in bright sunlight, the green of foliage and red and purple of spring flowers were vivid but not oversaturated. 1080p videos I shot also were clear and exhibited none of the blocky pixelation I've seen from phones with lower-res camcorders. The Video Stabilization feature, however, didn't do much to cancel out shake caused by my hands.

PerformanceI know many HTC fans are disappointed that the U.S. version of the One X has a dual-core CPU instead of the much-hyped quad-core Nvidia Tegra 3. Well, I'm here to wash that bitter taste of sour grapes away. Equipped with a powerful 1.5GHz dual-core Qualcomm Snapdragon S4 processor and a full 1GB of RAM plus 16GB of storage memory, this phone seriously hums. It flies through Android 4.0 Ice Cream Sandwich and HTC's Sense overlay with oomph and agility -- just like my experience of the HTC One S (T-Mobile). Linpack tests (Single Thread) confirmed the HTC One X's processing prowess: it notched a fast 103.5MFLOPS spit out in just 0.81 minute. On the same test, the One S, running an identical CPU, scored a virtually identical 102.4MFLOPS.

What the One X brings to the table that the One S lacks is a truly swift 4G data connection. While I saw maximum download speeds of 12.45Mbps on the One S over T-Mobile's HSPA+ network, the One X's 4G LTE connection obliterated these results. The HTC One X buried the Ookla Speedtest download needle with peaks often exceeding 20Mbps. Average download throughput came in at an impressive 16.63Mbps, and I even measured upload results at a high average of 7.53Mbps that once reached a high of 15.83Mbps.

Call quality on the HTC One X via AT&T's GSM cellular network was on par with other AT&T handsets I've used. For calls made in New York, voices sounded clear with no discernible static and people on the other end reported clean audio as well. The phone's slim speaker doesn't get too loud even with the volume pushed to the highest setting.

AT&T claims the HTC One X will run for 12.5 days in standby mode and provide 8.5 hours of talk time. That's a long time for a device with such a big screen. The One X does boast a sizable 1,800mAh battery, though as I mentioned, it's disappointing that the battery isn't removable. In anecdotal use both over LTE and Wi-Fi, the handset lasted a full 11-hour workday of moderate use (such as running tests, opening apps, and playing music), then was left unplugged overnight, and managed to cling on into the late morning before finally powering down. I'll update this review soon with more anecdotal video playback tests.

ConclusionAT&T has made waves this year with a few very prominent smartphone announcements. Though only a handful of devices actually have made it to market, the carrier's customers face a tough choice. In one corner, of course, is the $99 Nokia Lumia 900. If you ache for a Windows Mango smartphone, or simply a well-designed and affordable device on AT&T,I wholeheartedly recommend it. And in the other corner is the $199.99 HTC One X. It's fast, it's modern, and it boasts LTE, all of which at the moment makes it the best AT&T Android available.